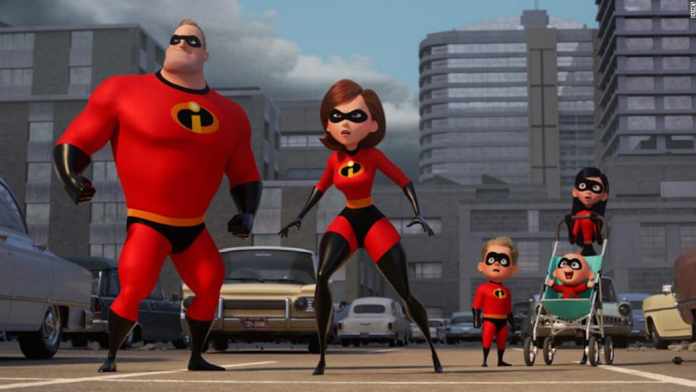 Fourteen years have passed since the movie, The Incredibles, was showcased in cinemas worldwide. This year, the sequel, The Incredibles 2, hit the theatres with a bang. Obviously, it continues the story of the first film and starts exactly from the moment the previous one ended, which is the arrival of the antagonist, Underminer. Plus, it expands on the mysterious powers of Jack-Jack, the baby, and explores the budding relationship between Violet and her crush, Tony.- The Incredibles Franchise

If you look closely, you’ll find a subtle thematic thread running through the overall story arc of the two films. This theme starts from the presence of the villains, who are given technological powers in contrast to the naturally powerful superheroes. And surprisingly enough, this technological ability of the villains is considered the root cause of their evil. In the first film, Syndrome, who was born without any powers, uses technology to try and wipe out the naturally-powered superheroes. Similarly, in the sequel, it is the superpower-less Screenslaver who, with her technological backing and fortune, schemes to rid the world of any sort of superheroes.

It is visible in both films how normal society dislikes superheroes, to the extent that they ban them from their circles. This is where the Pixar films define morality, by giving superiority to naturally super-powered heroes who win over those individuals who make their stand on the basis of their technological ability. In other words, the films tend to lend primacy to the ‘natural’ over the ‘technological.’ Check it out for yourself by watching The Incredibles on your Mediacom cable TV.

The two films are almost a generation apart. The times between then and now have undergone a radical change, and the two villains’ backgrounds reflect that. The Incredibles came out in 2004, which was a time marked with military action in the Middle East and the flourishing technological development that aided it. Now, in the movie, the villain Syndrome, uses his technological prowess to create super-powered weapons of a high grade and plans to sell them to the highest bidder. However, his failure indicates a mass cultural dislike towards military-industrial endeavors and a criticism of the newly-moneyed technological boom.

See also  How to Structure a Data Science Dream Team

The present day is the backdrop of The Incredibles 2, which has seen more technological advancements than ever. AI, smart gadgets, and air-purifying towers are a reality now. Nearly every sector of society has some form of technological inculcation or another. As much excitement as there is regarding this tech-growth, there is widespread phobia too, which can be felt in this movie. What sort of a fear is this? The public paranoia about tech giants abusing their power and exploiting the general public as a whole. The villain in the movie, Screenslaver, turns out to be tech-savvy and an old-money heiress who inherits her family’s business and uses that platform to take advantage of the regular people and the superheroes alike, simply to serve her own purposes. Do you see how the film justifies the public’s fear and even corroborates it to some extent?

Every story tackles a viewpoint, presenting a good and bad side and then argues for the side it wants to favor. That’s just the way it goes. Take for example the X-men series, where Charles Xavier fights for the mutual co-existence of the mutants and humans and Magneto wants the mutants to overpower the super-prejudiced humans. After familiarizing the audience with both sides, the movie defines the right and the wrong.

In the same way, The Incredibles franchise deals with an ideal of a perfect America, glorifying what it once was and should definitely be again, while vilifying what it has become i.e. a technological mess. This is how it hails a sweet-layered nostalgia over groundbreaking, inventive progress. This can be seen in the background design as well. But, primarily it can be observed in the way the two villains are depicted because they are not able to do the things superheroes can do, they build their power on the basis of the technological devices which serve as compensation. Syndrome hates the fact that he couldn’t fight crime alongside his idealized heroes, while Screenslaver is guilt-ridden over not being able to save her father. Because of their near-misses, both turned and crossed over to the dark side. Technology becomes the only way they can fight against what they lack, break the status quo and challenge the nostalgia of the ‘good old days.’

Defeat of the Technological Villains:

There is a constant war between the two sides. The Incredibles want to return to the past, move back to the times when superheroes were at the height of their glory, were privileged above all else and much more accepted by society. Whereas, the villains want to move towards a future that is equalized by technology and where superheroes aren’t superior to anyone. This conflict is played out on the canvas of the present. How is it settled exactly? By the defeat of the villains, naturally. But their defeat is the defeat of the onward progress, the defeat of a technology innovating over the natural order of things, which the movie has made and reinforced time and time again. Syndrome’s plan has two steps. One, he wants to unleash his ‘powerful’ tech on the masses and then appear just in time to save them and appear as a ‘technological’ hero. Two, he wishes to sell his advanced, artificially powered technology to the public so that everyone can feel powerful, not just the privileged superhero’s. In this way, he threatens the superheroes’ natural supremacy. But, the movie, which likes the status quo as it is, foils his plans in the end.

See also  Best Cars for a family of 5 people

It’s not only the technological villains, but the technological advancements that are also deemed as inefficient. When the heroes save a bank from being robbed at the beginning of the film they are chided by a police officer for damaging the property in the process, despite the fact that it was already protected by insurance. This argument is waved off by the superheros, and shown in a negative light, undermining the potential of the advancements.

Thus, Pixar shines a light on its own brand of nostalgia and prefers to present childlike innocence by going against whatever inhuman change technology seems to represent. This kind of ‘harking back’ sort of makes sense given the current digital world, where kids are hooked to their device screens like zombies. This ‘zombie-card’ is precisely what’s played by the Screenslaver in the sequel, as she enslaves non-superhero’s using their own technology and mobilizes them against them. Her defeat teaches kids the value of the natural and the evils of the technological obsession. But I’m not sure how long this technophobic Pixar scheme will go on as we cannot deny the ease and convenience which the game-changing technology has brought about. If you negate it all, you’re negating the future, as it is nothing but technologically-oriented.

5 Reasons to Switch to Renewable Energy

A Complete guide on How to Open Closed Google Chrome Tabs

A Complete guide on How to delete Spotify Account

Flynn Earl Jones: Is He a Actor Like His Dad?

Vaibhav Kapoor - January 25, 2023 0
Have you ever thought about what it's like to grow up in the spotlight? Cameras following your every move and journalists clamoring for a...

What is the best career in business administration?